22 Aug What Is a Discovery Deposition?

So, what is a discovery deposition? Discovery deposition is a method of the civil procedure whereby one party to a lawsuit may question an adverse party or witness, under oath, about information relevant to the case. The questions and answers are recorded by a court reporter, and the transcript may be used later at trial.

The Importance of Depositions

Depositions can be very helpful to attorneys in preparing for trial. They allow attorneys to get an idea of what a witness will say in court, and they can also be used to impeach a witness if their testimony changes. Depositions are an important part of the litigation process, and they can be very helpful in preparing for trial. 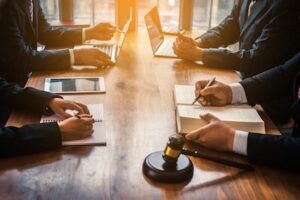 A discovery deposition is a method of the civil procedure whereby one party to a lawsuit may question an adverse party or witness, under oath, about information relevant to the case. The questions and answers are recorded by a court reporter, and the transcript may be used later at trial.

Discovery depositions are typically conducted in attorney’s offices, but they can also be held in court buildings or other locations. The location of the deposition is usually agreed upon by the attorneys involved.

One of the most important aspects of discovery depositions is that they are taken under oath. This means that witnesses must tell the truth when answering questions. If a witness lies during a deposition, they may be charged with perjury.

Discovery depositions are an important part of civil litigation and play a vital role in gathering evidence and building cases. Attorneys must ensure that all questions asked are relevant to the issues in dispute, and witnesses must be truthful when answering questions under oath.

What Should You Do to Prepare for a Discovery Deposition?

As an attorney, there are a few things you should do to prepare for a discovery deposition:

This means having a good understanding of the case and the issues involved. It is also important to know what information you want to obtain from the witness.

Pay attention to everything that is said during the deposition. You may need to refer back to the transcript later, so it is important to get everything down accurately.

3. Do Not Let the Witness Off the Hook

If a witness seems evasive or unwilling to answer questions, do not let him or her off the hook. Keep asking questions until you get the information you need.

If a witness says something that is unclear or contradicts other evidence in the case, be prepared to follow up with additional questions.

If an attorney objects to a question, do not argue with him or her. Simply ask the court reporter to note the objection and move on to another question. What Is the Difference Between Discovery and Evidence?

Discovery depositions are taken for the purpose of gathering information from a witness. The questions asked during a discovery deposition are typically not leading, and the scope of questioning is broad. This allows attorneys to explore all areas that may be relevant to the case, without having to focus on a specific issue.

Evidence depositions, on the other hand, are taken for the purpose of preserving testimony that may be used at trial. The questions asked during an evidence deposition are typically leading, and the scope of questioning is more narrow. This allows attorneys to focus on specific issues that they anticipate will be relevant at trial.

What About Discovery Versus Trial? Making or Breaking a Case

When it comes to winning a court case, the discovery deposition can be key. When you have both sides exchanging information, there is the possibility that something key will come up that can make or break the whole case. Since this is so early on in the case, oftentimes, what happens during a discovery deposition can be critical in determining which side ultimately prevails.

Of course, it is also important to remember that discovery depositions can also be a minefield. There are a lot of rules and regulations that need to be followed. And if either side makes a misstep, it could have serious consequences. That’s why it’s so important to have an experienced attorney by your side during a discovery deposition. If you are an attorney, it will be important to make sure that you have legal mentors on your side that can help guide you through the proper questions and approaches that you need. You will also need to prepare your client for the opposing council’s deposition.

Why Do Depositions Get Canceled? What You Need to Know