26 Sep How Does Stenography Work?

Posted at 08:00h in Deposition Academy, Featured by Matt McWilliams

Stenography is a form of shorthand writing of writing quickly by using symbols or abbreviations for words. This allows stenographers and court reporters alike to transcribe spoken language as quickly as it is said out loud. There are many different stenography systems in existence, each with its own set of rules and symbols. The basic principle behind stenography is that it is easier to write quickly if you only have to remember a few symbols rather than whole words. For example, in the Gregg shorthand system, the word “stenography” can be written as “stn-grf.”

You may think you can type quickly, but you have nothing on a stenographer! In this article, we will break down how stenography works, why we use it, and how to become a stenographer. Keep reading to find out about the world of stenography. The Process Behind Stenography

Stenography is the practice of taking down dictation using syllables of the spoken word instead of fully typing it out. This allows stenographers to type at a much faster rate in order to keep up with what is being spoken. The machine that stenographers type on is called a stenotype. Whereas a traditional keyboard may have 70-120 keys, a stenotype only has 22 keys. Because of the smaller amount of keys, stenographers instead type out the syllables of the word using “chords”. For example, if a stenographer was transcribing the word “comforter”, they would use a chord making up the 3 syllables “com” “for” and “ter” instead of typing out all 9 letters.  Modern stenotypes are then able to translate the chords of syllables into their corresponding English words.

Additionally, a stenotype also has characters that can indicate sounds, numbers, or phrases. Because it is a court reporter’s job to transcribe every thing happening in the courtroom, even cries or sniffles need to be dictated. Once the stenographer has finished transcribing, the stenotype will print out the transcription. To the untrained eye, the transcription will appear to be jumbled letters and symbols with no meaning. However, a stenographer will be able to translate it clearly. More commonly, however, modern stenotypes have internal storage that will automatically translate the text to readable English.

Why Do We Use Stenography?

There are quite a few uses for stenography. Stenography can be traced back to ancient times, in which shorthand writing was used to quickly transcribe events. Most languages can be spoken faster than they can be transcribed, and many ancient civilizations were seeking a solution to this problem. The ancient Greeks, Chinese, and Egyptians all used a form of shorthand writing. Shorthand is the direct opposite of longhand writing, which would be meticulously fully writing out each word, most commonly in cursive writing. Shorthand writing became especially significant in offices before typewriters existed. Secretaries were required to write down information at high speeds to keep up with spoken language, and thus implemented the use of shorthand. Once typewriters became more prevalent, shorthand became mostly used on typewriters, which changed the ability to transcribe slightly.

In today’s world, stenographers are still highly sought out for transcribing live television, radio broadcasts, or legal proceedings. When you see closed captioning on a live broadcast, there is most likely a stenographer working behind the scenes to transcribe the broadcast. This is especially helpful to those with hearing impairments. Mainly, stenographers work alongside legal teams as court reporters.

Are Court Reporters and Stenographers the Same?

Although both know how to proficiently use shorthand, stenographers and court reporters are not the same. In order to become a court reporter not only do you need to master stenography, but you also need to have a thorough understanding of courtroom procedures, have the ability to transcribe actions and sounds, attend legal proceedings that need to be transcribed verbatim, and playback whatever has been said if the judge requests.

Additionally, court reporters typically have the power to swear in testimony. The role of the court reporter is vital in the legal process, as their transcription is given to both legal teams involved and is meant to fairly represent every going on in court. If a court reporter poorly transcribes the events in court, it could very well result in a trial being ruled a mistrial. 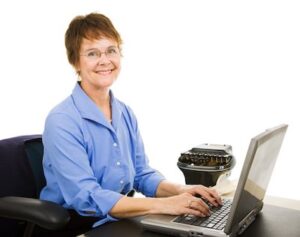 How Do You Become a Stenographer?

Similar to any other trade, it is important to secure an education to become a stenographer. It is required to hold a high school degree first, then move on to additional training, such as a community college or a vocational school. The benefit to attending a community college would be earning an associate’s degree over a certificate. It can take anywhere between 2-4 years to earn certification or a degree.

Course load to become a stenographer would be grammar, typing, shorthand, and how to use a stenotype. On top of that, if you are more interested in becoming a court reporter, you may also be required to take course about legal studies. It is vital to understand court proceedings if you are to transcribe verbatim to happenings in court. After certification or a degree is obtained, it is highly recommended to become an intern to receive on-the-job training and experience.

This certification allows you to be recognized as one of the top court reporters in the country. This can make you eligible for higher paying positions.

This certification shows that you have exemplary knowledge on court reporting and technical questions.

In order to obtain this certification, you must have been a member of the NCRA for at least 6 years and take a written test displaying your extensive knowledge of stenography. This is the highest certification a stenographer can achieve. Is Stenography a Dying Art?

With newer AI technologies developing, many stenographers are fearing the end of manual shorthand methods. However, AI is currently nowhere near perfecting verbatim transcription. For example, how often does your iPhone’s Siri feature accurately determine what you have said? Personally, I have made many a wrong call or text to someone using Siri. Also, the automatic closed captioning on YouTube is accurate maybe only 30% of the time. Although the AI technology is improving, it will be quite some time before it fully takes over the field of stenography. Also, as previously mentioned, court reporting is a process that must be correct in order to ensure a fair trial. Closed captioning is also an area that is vital to correctly transcribe, especially for political and newscasts.

Currently, the majority of stenographers are in the 50+ age group. This means that they are nearing retirement age and will leave a massive need for more stenographers. If you are interested in becoming a stenographer, now is the time to learn! It is estimated that the job market will be severely in need of qualified stenographers within the next 10 years. The average salary for a stenographer starts at 27k-61k a year. However, with continuing education and certifications, some stenographers can make up to 240k per year, making it a lucrative trade to learn.

In this article, we have have come to the conclusion that stenography is an incredible trade that anyone can learn. If you prove mastery in shorthand writing, speedy and accurate typing, this career path is one that can lead many places. Whether you are interested in the legal system, politics, or helping the hearing impaired to watch and understand radio and television broadcasts, stenography is a path worth exploring.

What Is a Stenographer?

How Long After A Deposition Is After Settlement?